Donation at the Door 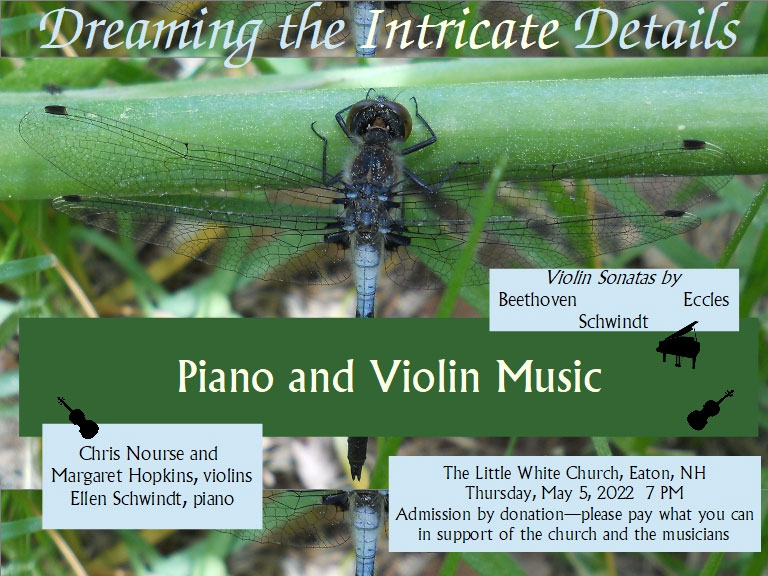 Admission is by donation at the door.

Joining Ellen are violinists Chris Nourse and Margaret Hopkins for this inspired program featuring Beethoven’s Sonata Opus 30 #2, original works by Ellen, and other pieces of Slavic origin in support of Ukraine and our collective longing for PEACE.

It’s my good fortune to have friends who like to bring music to life. Margaret Hopkins and Chris Nourse, both fine violinists, join me to realize some beautiful music. The concert is planned for Thursday, May 5, at 7 PM at the Little White Church in Eaton. Admission is by donation. Donations will support the church and the musicians. The program presents a series of sonatas and a set of folk songs from the Slavic world.

Many years ago, Chris Nourse and I worked up our first Beethoven Sonata to perform at the Little White Church. Around that time, I asked him which Sonata of Beethoven’s he wanted to play. His reply was “all of them.” We haven’t yet achieved that goal, but we keep playing them. This particular Sonata, Opus 30, number 2, was written in 1802 and published in 1803.

More recently, I began to write in the Sonata form. Slowly, my writing got smaller and smaller. I’ve completed several sonatinas for various instruments and piano. These are much shorter pieces, using the same kind of fast-slow-fast format as many Sonatas. Two of my Sonatinas are on our program. One was composed in 2019-2020, and one in 2016. Margaret Hopkins helped me record the more recent one last autumn.

When Margaret and I first played together we talked about other pieces we’d like to try. One of these was a sonata published by Henry Eccles. Scholars think that this Sonata was mostly Eccles’s own composition, but the second movement—the Corrente—came from one of Francesco Bonporti’s Sonatas. Perhaps people in those days had more of a “share and share alike” attitude than is prevalent now. I was already familiar with this Sonata. I found it when researching Solomon Eccles, Henry’s father, who was a famous early Quaker but burned his instruments when he converted to the new faith.

Because we all hope for peace, we will play some songs from the Slavic part of the world where violence is erupting. One is called “Storks on the Roof.” It asks for peace for the whole world, and for storks—a symbol of peace—to stand on every rooftop.